Philadelphia workers not getting enough sleep?

Philadelphia workers not getting enough sleep?

If you are feeling a little tired on the job you’re not alone as in a recent study, nearly half of workers surveyed indicated they weren’t getting enough sleep at night.  Fatigued workers defined as those only getting around five hours of sleep are nearly as prone to injury as someone driving under the influence of alcohol.  A reasonable sleep for most people is about 8 hours per night and anyone getting less than 7 hours is adding to their risk of accident and injury to themselves and others.

A study was done in 2016 by the National Safety Council (NSC) with the goal of quantifying the scale and effect of fatigued workers.  As part of this study, the NSC conducted a poll of 2,000 workers and found some staggering results.  Of the 2,000 surveyed, 43 percent responded that they were not getting an appropriate amount of regular nightly sleep.  Worse yet, almost 30% survey confessed that they had fallen asleep on the job and one in eight said they had nearly gotten into accidents or made an error that could have caused an accident due to fatigue.   These findings are raising the issue of workplace fatigue and sleep issues which are often undetected or treated.
So how does the culture in corporate American need to change to provide an effective solution to its fatigued workers?  There is an old adage about working smart versus working hard and it seems that company leaders need to abandon old metrics that point how much an employee is working and shift to acknowledge the general inefficiencies of fatigue in an employee (meaning they aren’t getting full performance) and much more significant the costs that can come from injury, loss and the irreplaceable loss of life.  It is estimated that workplace injuries account for more than $200 billion in costs to private sector companies alone. 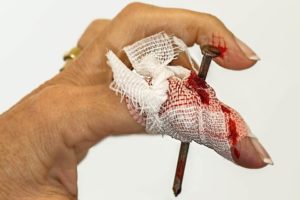 The issue of workplace injury is one that will likely never go away however it is clear that there are contributing forces, such as fatigue due to overworking or under sleeping that the corporate world needs to “wake up” to and provide more awareness, treatment and understand so that some component of workplace injury can be reduced by both common sense and medical practices.

Edelstein Martin & Nelson is the premier plaintiff’s law firm in Delaware.  We represent the wrongfully injured whether by accident or nefarious act we understand the tort law process and can use it to protect your rights.  Workplace accidents and injuries and other accidents are a key part of our subject matter expertise and if you have been involved in an accident you need legal counsel to make sure you are properly compensated for your injuries.   Our law firm is based in Wilmington, Delaware and our top-notch team of attorneys specializes in helping people to get the compensation that they are entitled to so that they can cover the loss of earnings, medical bills etc.  Contact Us at 800-300-0909 for a free case consultation.